3 Advancements in Artificial Intelligence that will blow your mind!

The year of 2018 should be affectionately referred to as the ‘Year of Sci-Fi Dreams’. This is primarily due to the fact that almost every unimaginable concept from the depths of science fiction cinema has started becoming a reality.

Even though the advent of Deep Neural Networks and Artificial General Intelligence (AGI) has been making waves across the technology ecosystem (like the defeat of World Champion Lee Sedol in the game of ‘Go’ by AGI AlphaGo-Zero), there have been a few innovations that have baffled even the brightest minds in the industry.

So ignoring the various trends and innovations in the world of AI, here are three technological advancements in the field of AI and Machine Learning (ML) that will blow your mind!

One of the biggest achievements in the field of Medicine was the creation of a fully functional human lung, just from stem cells. It marked the birth of a new era in medicine, especially when organ transplants were becoming increasingly insufficient.

But for the first time since the ‘Big Bang’, scientists have created an embryo like structure wholly from stem cells, without the involvement of sperm cells or female ovum (eggs).

The evolution of this technology could probably answer lingering questions to the origins of human life.

But the interim fear lies in the possible manipulation and subsequent exploitation of these GMO (Genetically Modified Organisms) or ‘Designer Babies’. Moreover, genetic modification falls under the category of ‘Legal Unethicality’, and is scrutinized carefully by different governing bodies in different countries. Due to the likelihood that life can be easily created from the stem cell of an embryo, this could result in the unlawful and unnatural creation of human life-forms by scientists in a lab, stringent guidelines are followed.

Recently a special authorisation granted permission to a group of Bio-Engineers and scientists, led by Kathy Naikan, to genetically modify embryos to improve IVF (In-Vitro Fertilisation) techniques and reduce miscarriages (using the CRISPR/Cas9 splicing technique). The sanction was approved under the pretext the GMOs were maintained for a period of no more than 14 days, and that it can never be implanted into a woman/uterus. These guidelines are implemented by central governing authorities, such as the FDA in the US and HFEA in the UK.

When famed writer Jonathan Nolan created the hit series ‘Person of Interest’, he probably did so in a bid to excite the people about the possibility of a software capable of processing facial recognitions and mannerisms in order to profile criminals.

This concept was also omnipresent in the movie ‘Minority Report’. But the truth is that China has already developed an AI that is capable of screening 50,000 to 100,000 people in a single stretch at a single venue!

The AI can perform this task continuously and cross-reference facial features with their detailed internal data-base. The software was tested out at a concert venue in Shanghai, and an individual with a prior criminal warrant for Arson and battery charges was successfully profiled and shadowed throughout the event, and was eventually taken into custody. 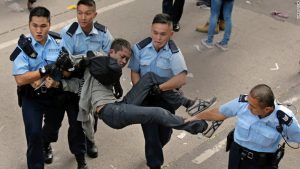 Technology like this would have come in handy for the prevention of past terrorist attacks, including the most recent unfortunate incident where a suicide bomber detonated himself and killed 22 civilians at an Ariana Grande concert in Manchester, UK.

Machine Learning and AI development company Sparkcognition, that is based out of Texas, had recently developed an integrated product knows as the DeepNLP.

The product aims to deliver ‘Human Intelligence at a Machine Scale’ through predictive analysis and interpretive Machine learning. The Deep Learning (DL) software processes human data, and interprets ‘INTENT’ to deliver insightful data, that is often missed by regular AIs.